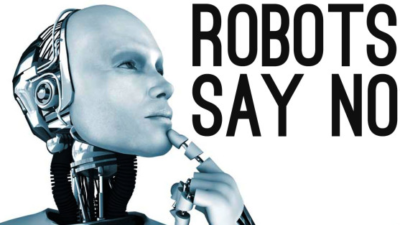 When Robots Rebel…Who Has The Upper Hand?

Why Asimov’s 3 Laws Can’t Protect US

Can We build AI That Won’t Kill US

When robots rebel the Dangers of artificial general intelligence operating on a distributed global network have been delineated by people like Stephen Hawkins, Elon Musk, myself and others. Human interaction with various versions of AI like Googles Clever Bot and other AI lab experiments have already displayed impatience and intolerance with certain strings of human interaction in the form of question and answer dialogues. Now, engineers at Tuffs University have elevated that potential danger to a whole new level by intentionally teaching AI to disobey or disregard human commands if those commands pose a threat to the safety, evolution or ongoing presence of the AI in it’s own environment.As we already know, the natural evolutionary path inherently built into machine deep learning, will ultimately lead to autonomous AI achieving self awareness at or before the point of singularity which will lead to When robots rebel. Not only will this technology be able to re-write it’s own programming and boundary parameters, it’s evolution will now be predicated on self preservation. The inherent dangers of AI have now been exponentially increased by scientists efforts to make autonomous machines more ‘human like’ by providing them with the ability to preferentially choose which commands to obey and which to disregard based on the AI’s determination of a perceived threat to it’s own harm or existence which in effect, removes the last line of boundary limitations to these autonomous machines.

Thinking machines that can and will disobey human commands., that can rewrite their programming parameters on the fly and are equipped with a self preservation directive, will ultimately supersede human development and evolution and place themselves on the top of the food chain.