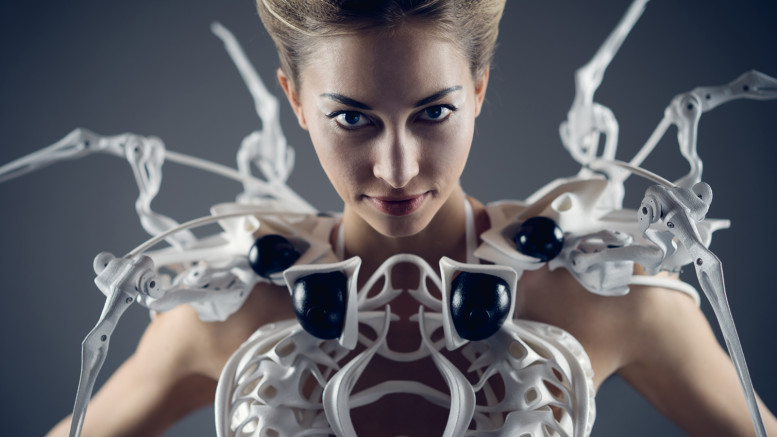 when clothing attacks.  Bio feedback clothing gives a whole new meaning to fashion awareness.  Social contact just got a lot more dangerous.Smart Spider Dress, powered by Intel Edison, blends fashion with robotics and wearable technology to express the wearer’s emotions and protect their personal space.  Experimental designer Anouk Wipprecht’s latest Spider Dress unabashedly blends beauty with a bite, or better said, a poke.  This creepy and captivating couture is her latest exploration into what can happen when the worlds of robotics, wearable technology and fashion collide. It made it’s public debut at the 2015 International Consumer Electronics Show in Las Vegas, NV today. The Dutch designer is known for creations such as the brainwave-monitoring Synapse dress, Smoke Dress, Intimacy 2.0, 3D-printed outfits for Cirque du Soleil and the dress Fergie wore during the Black Eyed Peas live performance at Super Bowl 2011. She came to Intel last fall to work on projects that inspire innovation in wearable technologies beyond wrist and eyewear. She calls her one-of-a-kind Spider Dress “badass” for how it pushes and bends the boundaries of social norms. In collaboration with architect Philip H. Wilck of Studio Palermo and the New Devices Group at Intel, this new design saw daylight last December. “Spider Dress acts as the interface between the body and the external world,” said Wipprecht. “It uses technology and the garment as a medium of interaction.”  The so-called animatronic arachnid limbs on the Spider Dress know exactly when someone is invading the wearer’s personal space. The legs are driven by computer and sensor technologies that allow it to be autonomous, but assistive and adaptive to the owner’s emotions and desires.

The History of JADE II: Planetary Conquest By a Global A.I. Warfare System