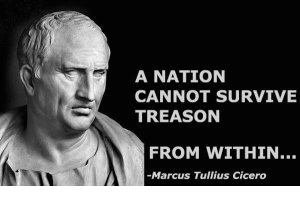 Warnings Of Future Past

Cicero warned of this 150 years prior to Rome’s decline in 111 AD. Although Rome’s fall took another 350 years to completely transpire, we appear to be on a fast-track to our own demise. Warnings of future past

“A nation can survive its fools, and even the ambitious. But it cannot survive treason from within. An enemy at the gates is less formidable, for he is known and carries his banner openly. But the traitor moves amongst those within the gate freely, his sly whispers rustling through all the alleys, heard in the very halls of government itself. For the traitor appears not a traitor; he speaks in accents familiar to his victims, and he wears their face and their garments, he appeals to the baseness that lies deep in the hearts of all men. He rots the soul of a nation, he works secretly and unknown in the night to undermine the pillars of the city, he infects the body politic so that it can no longer resist. A murderer is less to fear. The traitor is the plague.”   ~ Marcus Tullius Cicero 106-43 BC

Rome continued to decay. The ambitious were fattening upon its bones. The liberties of the people were lifted one by one in the name of emergencies or traded in on benefits. Lucious Sergius 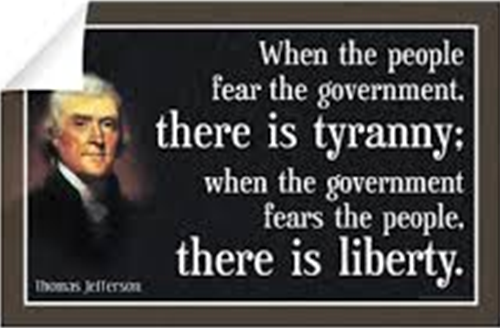 Catiline (Catilina), brilliant, uninhibited, and evil, was pressing his suit for leadership and, in his course, curtailing the rights of all those who disagreed.

Is this not what we’re seeing today? It did not happen overnight. It took decades of complacency to arrive where we as a nation find ourselves today. Can we not apply this template today, to most people in or seeking political office. Money is a nice motivator, but power is the ultimate goal…seeking power and supreme control over those who elected them to govern. We are seeing our rights and our freedoms being abrogated by those willing to do whatever it takes to attain political office and the power over the people they wield from on high. Are we not seeing our rights and freedoms being stripped away, or more aptly put, “traded” in the name of emergencies (pandemics) and benefits – in the name of ‘the greater good,’ being handed out by government, only to have us become more and more dependent on it. We are seeing a totalitarian state pushing through the gate of our Democratic Republic under the proclamation of many virtues, all of which are deceptive at the core.       Warnings of future past

Cicero, in his Second Oration before the Senate, had this to say: “Too long have we said to ourselves, intolerance of another’s politics is barbarous and not to be countenanced in a civilized country. Are we not free? Shall a man be denied his right to speak under the law which established that right?’ I tell you that freedom does not mean the freedom to exploit law in order to destroy it! It is not freedom which permits the Trojan Horse to be wheeled within the gates. He who is not for Rome and Roman Law and Roman liberty is against Rome. He who espouses tyranny and oppression and the old dead despotisms is against Rome. He who plots against established authority and incites the populace to violence is against Rome. He cannot ride two horses at the same time. We cannot be for lawful ordinances and for an alien conspiracy at one and the same moment.”

We are seeing this being played out today in all it’s despotic splendor. Those on the left are intolerant of the right, Democrats are intolerant of Republicans. I would say that this mindset is more prevalent on the left and in the Democratic Socialist Party as they actively seek to punish those who disagree with their platforms, ideologies and virtue signaling being supported by propaganda in the MSM. We are seeing the rule of law being exploited in order to destroy it. Constructive discussion and civil discourse is nowhere to be found in politics today. If you listen carefully, you can hear beneath the posturing, the whispers coming from officialdom, “I am the Lord Thy Government and there shall be no other gods before me.” Politics and science have been elevated to the status of religion. Those who disagree with their fundamentals or even dare to question them are damned as blasphemous. They are ‘canceled’, berated and shamed in the arena of public opinion. 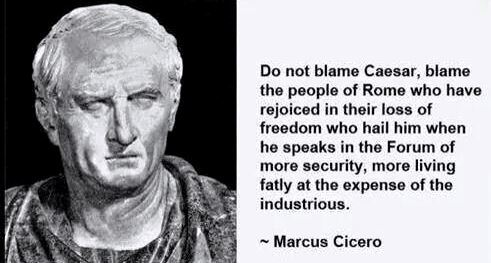 In Madison’s drafting of the Bill of Rights, paramount to all others was the First Amendment to the Constitution which states, “Congress shall make no law respecting an establishment of religion, or prohibiting the free exercise thereof; or abridging the freedom of speech, or of the press; or the right of the people peaceably to assemble, and to petition the government for a redress of grievances.” I guess he could not foresee the use/abuse of Executive Orders and Mandates. He knew that if these fundamental rights were to be infringed on, the other nine would fall like dominoes as this was a cornerstone of our Republic. How did he know that? Because he knew history and the lessons to be learned, as well as the strategies used through time and memorial like the warnings presented by Cicero over 2,000 years ago. So ask yourself, why the push to erase American history. The answer is clear. We can’t learn from what we don’t know.   Warnings of future past

Cicero was exiled from Rome but not from his conscience. He continued to plead the cause of honest government. But the people he pleaded for were not concerned. His friends, the lawyers, the doctors, and the businessmen told him: “We do not meddle in politics. Rome is prosperous and at peace. We have our villas in Caprae, our racing vessels, our houses, our servants, our pretty mistresses, and our comfort and treasures. We implore you, Cicero, do not disturb us with your lamentations of disaster. Rome is on the march to the mighty society, for all Romans.”

Cicero’s fight for honest government fell on deaf ears. Those in power controlling the reigns of government did not want anything disrupting the status quo. They were of the mindset, ‘it works for me, too bad it’s not working for thee.’     Warnings of future past

We’ve become complacent in our duty to oversee the actions of these politicians in a government for the people, by the people. Those who seek power through political office are precisely those people who should never hold political office. We are witnessing America being destroyed by the traitors within. What legacy will we leave for our children and grandchildren? Some say, ‘I can’t wait for the chaos to be over,’ but are not willing to do anything to push back. Others say, ‘this too shall pass,’ but it won’t. What will suffice as ‘passing’ will be the rise of a socialist state which, history has taught us, will rapidly fall to communism.

COVID COMMUNISM | An Overview For Your Consideration

BUSINESS REOPENING SCAM | Businesses Will Be Decimated by Regulation

COVID-19: What You’re NOT Being Told

THE PUSH FOR AI IS COMING FROM GOVERNMENT | White House : Artificial Intelligence For The American People

RFK Speaks Out, PEPFAR in Spotlight

EPA: Hostile Take Over of Power Generation in the US

ObamaCare: Neither Affordable OR Healthcare