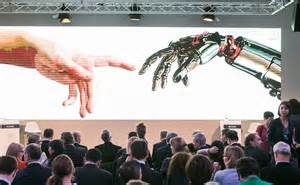 The Rise of AI on the IoT

The Financial Times’ Murad Ahmed’ speaks to Erik Brynjolfsson, the director of MIT’s Initiative on the Digital Economy, about the rise of artificial intelligence, how it will transform industries around the world, and what the second wave of robotics entails.

AI Will Be Making Decisions FOR You

CleverBot: A Version of This May Become Your Personal Butler

Rise of AI on IoT. The rise of AI on the IoT focuses on automation, robotics, machine-driven industries and artificial intelligence (AI) in its predictions for 2016 and beyond. Rise of AI on IoT. The rise and rise of machine-generated content gets a prominent mention, projecting that by 2018, 20 percent of business content will be written by machines, using data and analytical information which has been converted into natural language from the IoT. Smart machines (AI) will continue their march into the working environment, with Rise of AI on IoT predicting that start-ups and small companies will use the technologies to enjoy greater speed, cost savings, productivity and scalability. Between now and 2018 45 percent of fastest-growing companies will have more smart machines in place than they have employees with the Rise of AI on IoT . AI powered digital assistants operating on the IoT will learn to recognize individual customers by both face and voice, and will mimic human conversations. 2016 will see a rise of AI “bots” that will supercharge our productivity, keep us company and possibly even help us fall in love. You’ll be able to use and program them yourself. AI has a profound effect on the news media. Stories are written and posted on the IoT with no human intervention and media sources like Facebook use formulas to choose what you’ll see and what you won’t. The rise of AI Cognitive computing will further develop and complex systems now run by teams of people will be automated on the IoT. Computers are already doing the work of trained radiologists to analyze medical images. In Australia, one system will be used to manage natural gas facilities.  Consolidation will be marked by the rise of AI on the IoT with IDC projecting that by 2018, 75 to 80 percent of IoT based public cloud services will be provided by 6 platform vendors, including Amazon, Google, IBM, Microsoft, and Salesforce.

HUMANS WILL BE OBSOLETE BY 2025