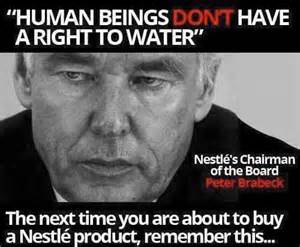 Nestle CEO: Water Is Not A Human Right, Should Be Privatized

Our Drinkable Water Supply Is Vanishing

Destroying and privatizing fresh water supplies could be the common denominator between all the California, Oregon, Washington state fires, some still burning, be “Gold Rush Towns” or is it due to abundant other metals such as LEAD (poisoning the water supplies)?  See the connection to the EPA spill at the Aminas River, Colorado a 3 million gallon toxic spill; Georgia Cotton Mill toxic spill due to an alleged water line break, wherein EPA private contractors were also present at each location. The EPA and other Federal agencies were allegedly overseers of the Fielders dam removal causing another “toxic sludge release” into a major fresh water supply. These are nothing other than acts of sabotage. Period. The question remains, WHY? The answer is the are actively moving to destroying and privatizing fresh water supplies. There are global events which are also relevant. The U.S. Federal agencies deplorable excuses and blatant lies are repugnant.  In Washington state a U.N. Helicopter was purported as allegedly landing then two men exiting using “a light beam” starting a fire, then were observed again at a second location starting a brush fire.  The BLM and EPA are acting hand in glove in attempted land grabs and are complicite in the destruction nd privatizing fresh water supplies.  It appears they will stop at nothing in bold attempts to steal what is not theirs, destroying people’s livelihood, lives, earth and air in the process of their diabolical evil acts of intentional destruction of the planet. Take a look up at our chemtrail skies. EPA, CLEAN AIR ACT. On the scene at the abandoned gold mine in Silverton, Colo., at the source of the spill that has turned the fresh water Animas River orange. The plume of heavy metals released last week into the Animas River from the Gold King Mine near Silverton, Colo., reached Utah on Monday.  McGrath said future water runoff from storms will kick that toxic sediment back into the water, which means there will need to be long-term monitoring.