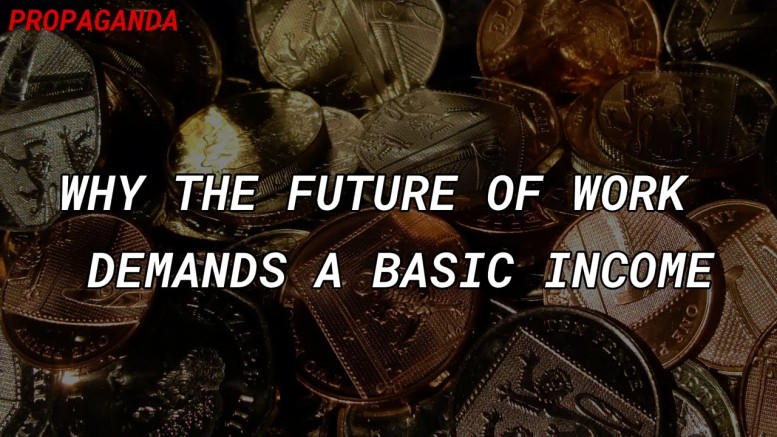 A Bridge To ‘The Great Decoupling’ basic minimum sustainable income

Basic income.  The ‘Great Decoupling’ is underway in the form of Artificial General Intelligence [AGI] displacing the human work force with automation in all forms of economic production and distribution.  This decoupling can be described in the context of three technological waves.   1st Wave:  This wave has already occurred and presented itself in the form of machines running narrow based AI in order to replace human muscle power.  This wave was welcomed among laborers and manufacturers alike as it reduced the physical demands of employees while increasing the out put [and profits] of manufacturers without long term cost implications.  2nd Wave:  This wave is marked by the augmentation of human intellectual power by the infiltration and combination of AI and AGI smart systems.  These are cognitive, contextual decision based systems that production and distribution entities used to rely on human decision makers to perform.  In addition, increased data collection using the Internet of Things [IOT] on everyone about every aspect of their lives in order to create individual and group based digital profiles has provided an invaluable tool for marketers and advertisers to provide their corporate sponsors with current and future demands in their economic and financial sectors.  This has created an increasing reliance on web based automation systems in the areas of:

Social interaction and communications  …which has created an increasing reliance on this technology as we go about our daily routines.  It is becoming increasingly more difficult to function in today’s society without being connected to the Global Information Grid [GIG].  The average person is being converted to a digital human network node on the GIG.  This wave incorporates AGI across multiple platforms on distributed networks.   3rd Wave:  Figuratively speaking, this wave is breaking on the shore as we speak.  This wave, is the final wave in a technological based technocratic global Command and Control [C2] system and will present in the form of dominance over economies, finance, food, energy and essential service production and distribution, communication, transportation and all other basic life essentials including social management and governance we used to rely on government to provide.  This wave will engulf the world in a neural net driven by AGI.

Debate: Is The Internet Is A Failed Utopia [video]